If you are not familiar with Oracle Linux, this may be the technology included with the distro that makes you pay attention to Oracle’s Free and Open Source Linux distro. Oracle Linux has been around since 2006, and is a completely free distro that is based on the most popular open source technologies. It is free to use, free to distribute and also FREE TO PATCH! Yup, you do not have to pay to patch!

Also, and to me, more importantly, it is built on Free and Open Source solutions, that do not put a propitiatory front end between the admin and the technology. This means you get to avoid vendor locking, leveraging technologies like Docker, Kubernetes , oVirt and more, all without a proprietary front-end that locks you to a single vendor.

Oracle also has been growing their Open Source projects they support, from Spacewalk to LEAPP,  Oracle has been supporting customers use of Free and Open Source Software (FOSS)  solutions.  Recently Oracle added a new technology to this mix, releasing an Ansible Tower like technology , built on AWX, the Ansible open source project. This new tech is called Oracle Linux Automation Manager (OLAM) , and it basically gives you all the features of Ansible with a supported and reliable patch and release mechanism, for free!

So effectively, you get all the power of both Ansible Tower and Ansible for free.

Installation is fairly straight forward as well, though you will need to install it on an Oracle Linux 8 server. For my Lab, I installed OL8, and gave / 50G, /var 10G /var/log 5G /u10 20G and /home 10G. All my filesystems are  under LVM, so I can grow any filesystem as needed down the road. My VM also has 8G ram,and two vCPUs ( Running under oVirt managed KVM) . I split /var and /var/log for two reasons, logs ( and other junk in /var and /var/log)  filling up the root filesystem  and it also lays in the groundwork to STIG servers down the road.

Before installing OLAM, you will need to do a few things;

Add the OLAM Repo, as root run the following command;

You also will need to enable the following repos;

This can be done with the following command, as root;

You also will need to add http and https to the firewall;

Next , install OLAM, which is just another dnf command!

Next we need to make some changes to Redis. Redis is a caching system, commonly used to store objects in RAM to improve performance.

Edit /etc/redis.conf and add in the following lines;

Next, we will initialize the Postgres database. Yes, this uses Postgres, NOT Oracle!

Next, as the awx user we need to prepare the initial config

and then run the following commands;

the first command initializes the system, and the second command makes the admin user. Remember  to replace EMAIL with the email address of the system admin.

Next we need to create the pre loaded data, and provision the OLAM instance. replace olam.m57.local with your host name.

Last, we need to configure the NGINX web server to use a snake-oil SSL key.For those not familiar with NGIX is a a very simple, and fast web server. While not a feature rich as Apache, it is much faster.

To reconfigure NGINX, switch back to the root user.

next edit the /etc/ngix/ngincx.conf file and delete the server stanza;

# Load configuration files for the default server block.
include /etc/nginx/default.d/*.conf;

This is done, because AWX installs it’s own SSL based config in /etc/nginx/conf.d/ol-automation-manager-nginx.conf, which is automatically loaded by the main ngnix config file.

Finally, one last bit to configure before starting the server,  you need to edit the /etc/tower/settings.py to set the CLUSTER_HOST_ID to the server name, like this;

Finally, we can start the server, and set it up to run at boot!

Now point your browser to the URL, in my case https://olam.m57.local, and accept the snake oil cert.

You should now see the login screen. 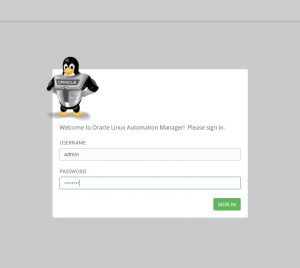 Login in with the admin user you created, and you should see the main admin page for the OLAM server.

Welcome to FREE and OpenSource Automation at a cloud scale! Look for a few future posts where I setup Projects, add hosts and automate some basic tasks.